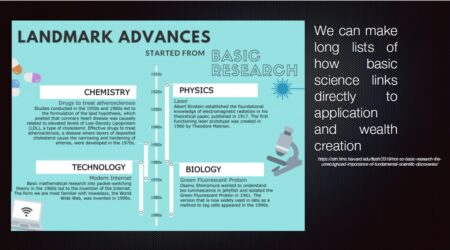 Iain Young is Dean of Science at University of Sydney. See his take on advocacy for basic science research, from this summary and slides of his address to the ACDS AGM.

Questions from the Floor

Response: We need to improve our lobbying skills as a sector; to date, our message has not been cutting through. Our key funding bodies, such as the ARC also need to become effective lobbyists for the sector, and at present they do not engage in lobbying. In contrast, the UK funding agencies have proven to be very effective lobbyists. This has led to UK Governments understanding the value of basic science in supporting wealth creation, and to more balanced approaches to funding both basic and applied research. Germany, and the EU in general, also have a more sophisticated approach to supporting both basic and applied science.

In Australia, much of our basic science only adds to the “knowledge pot” without being used effectively for wealth creation and hence it is not highly visible to Government. At a more fundamental level, the connectivity between basic and applied science in Australia is not well developed, and certainly not well understood by Government. The particular importance of the decadal plan developed by Australia’s physics community which, among other things, envisaged the creation of an Australian leadership role in the development of the Square Kilometre Array is an example of what can be achieved from a lobbying perspective. However, there is no one body in Australia that has effectively communicated the importance of the connectivity between basic and applied science to Government (STA should perform that role to some extent).

Response: The role of the AAS is complex and multi-faceted, and in terms of maintaining funding for basic science, they have not been as successful as we might hope. However, the Government is currently focused on wealth creation, and does not appear to be receptive to the key message regarding the importance of basic science in enhancing GDP. This is partly our fault, and we need to become more effective at lobbying and staying “on message” – the remarkable contribution of quantum mechanics to world GDP is one example of the success stories that we should be using to lobby Governments.

Response: Yes! We need to develop multiple approaches to selling a consistent narrative. The Chief Scientists operate independently of their respective Governments but are generally highly regarded by them.

Response: We should certainly explore such approaches. The medical community has been more successful with implementing similar approaches than the science community in Australia. We should also ensure that the success of the science community in delivering outcomes such as the mRNA vaccines that have proven to be so effective at treating COVID‑19 continues to be emphasised to Government. As a Council, the ACDS might consider what we can do to develop and sell a consistent, “cut-through” narrative to Government which duplicates the “Save British Science” campaign that was founded in 1986.