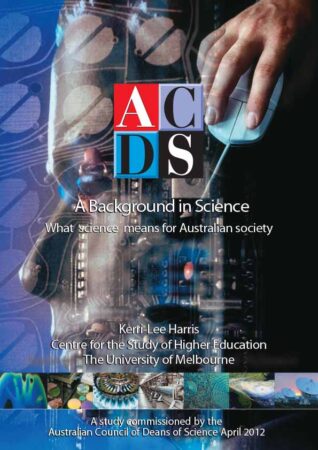 A Background in Science explores the broad value of studying science using insights contributed by over 800 people who identified themselves as having a background in science.  The study was launched by the Chief Scientist, Prof Ian Chubb, at the ACDS Teaching and Learning Conference in July 2012 where author of the study, Dr Kerri-Lee Harris presented key findings from the study.

Contributors were invited to participate irrespective of their current occupation, field of study or when they had last undertaken formal study in science.  This approach produced a very rich data set which shows how a scientific mindset and scientific knowledge influences many aspects of the lives of contributors; from those who work as practicing scientists to those who use their scientific mindset as the “go-to” people for colleagues, employers, friends and families when science-related questions arise.

The study emphasizes the value of scientific thinking skills in a wide range of careers and points to the importance of scientific literacy for graduates in contemporary society.  It has implications for the design of science and allied degrees and encourages Faculties of Science and related groups to set broad goals for science education.