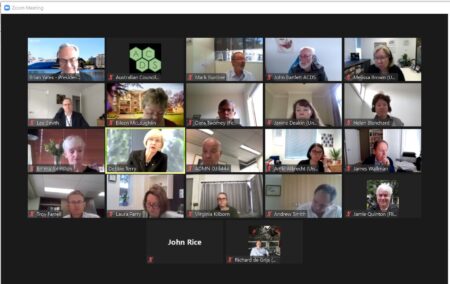 Session 1 of the AGM was held on Monday the 26th October and included a conversation with the Chair of Universities Australia and CEO of Science Technology Australia. Professor Terry gave a very high level view of the Federal budget and Job ready graduates package, highlighting the benefits to the sector and acknowledging that the government had positively responded to many of the benefits that we have been seeking for many years. She also emphasized that the evidence used by the Department was based on data that had been provided by Universities.

During the questions and subsequent discussions, it became very clear that there continues to be significant concerns held by Science Deans about the impact of this change on Science Faculties and that this has not been sufficiently acknowledged in the review and revisions of the associated legislation. Our members agreed that the impact on Faculty budgets, quality of teaching and academic workloads and well-being, along with the associated lack of incentive to grow the number of Science students and graduates (one of the goals of the package) were of great concern and need to be addressed with urgency.

The ACDS Executive for 2020-2021 was confirmed and a new Peer Mentoring program for Deans was launched.

Session 2 of the AGM held on Monday 9th November had a focus on industry engagement and included a panel of state chief scientists (Professor Hugh Possingham, Qld, Professor Peter Klinken, WA and South Australia’s Chief Scientist Professor Caroline McMillan) who discussed opportunities for university science to engage with and win support from industry, particularly against a background of state innovation strategy.

In the final Session on November 23rd we will hear from the ARC and discuss issues around research funding. We will then hear from our Teaching and Learning Centre about its activities and proposals for 2020-2021.