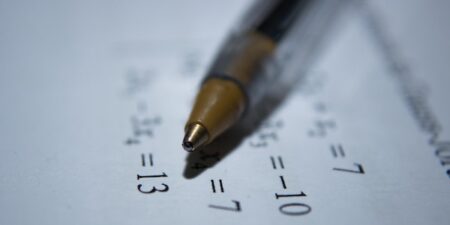 The Australian Council of Deans Science (ACDS) commissioned the Australian Council for Education Research (ACER) to undertake a study of the impact of year 12 mathematics on first year university science performance. To our knowledge it is the first such national study, albeit quite modest, that has been undertaken.

The study looked at 16,436 first year students in biology, chemistry, mathematics, and physics from twelve universities covering a range of types. It looked at their pass rates against the level of mathematics that they studied in year 12, including whether they had studied any mathematics of significance to a science degree.

In the sample of Go8 universities pass rates ranged from 96% in biology down to 83% in mathematics. Among the non-Go8 sample the range was 88% down to 73%. Some of these pass rates could be better, and steps should be taken to improve them. But they are not disastrous. This is certainly in part because universities are adapting their curricula and pedagogy to the more diverse backgrounds with which students present. How well this adaptation is occurring and its effect on standards is a complex matter to judge.

Nonetheless, the study shows that
• In general, those who study higher levels of mathematics have a higher likelihood of passing their science and mathematics subjects.
• Senior secondary mathematics background remains a statistically significant influence on first year subject outcomes after controlling for ATAR and other factors.
• Students who were strong performers in Year 12 mathematics (irrespective of the level of mathematics undertaken) have very high first year pass rates.

One striking observation is that 25% of year 12 students entering science in non-Go8 universities have no recorded significant background in mathematics that might relate to the study of science. A more detailed study would doubtless reveal large variations in this figure among the non-Go8 group, which is very heterogenous.

Representing as it does, an enormous wealth of experience in research and teaching, the ACDS stands strongly by the view that mathematics is an essential foundation for understanding science. A lack of mathematics background, if not addressed, will have a very negative impact on the quality of a university education in science and mathematics, for students’ learning experience and for their depth of understanding. It may well be that first year pass rates do not adequately capture these quality issues.

What is most likely is that students underprepared in mathematics are provided with enabling courses, or their primary courses are tailored, so that they gain some of the necessary background. This could be seen to represent alternative pathways into the study of science. However they are often not considered so, are conceived as deficit models against standard pathways and are often short-changed in time and resources.

The issue of mathematics preparation raises important questions about pathways and what the shape of our education system should be. Should we defend the linear ‘school to university’ pathway as the primary model for science education, or should we look to support new pathways, properly conceived and resourced, to allow life-long learning? A discussion including the latter possibility and the quality measures by which these pathways are to be judged may be more productive than one that focusses only on one-size-fits-all  prerequisites for university entry.

Photo by Antoine Dautry on Unsplash